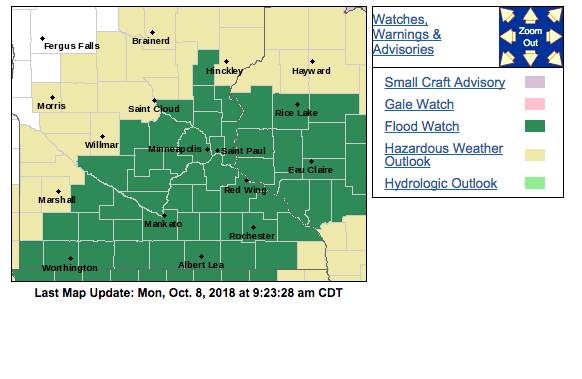 According to the alert, “A stalled frontal boundary that extended from the Plains to the Upper Midwest will focus a corridor of nearly continuous rainfall, occasionally heavy, across the region from later this afternoon through early Wednesday. As the potential of thunderstorms develop later today, and into tonight, rainfall rates will increase, leading to runoff and possible flooding.”

Widespread rainfall totals of 2 to 4 inches are expected, with a swath of 5 to 6 inches possible from south central and east central Minnesota to west central Wisconsin.

Prolonged moderate to heavy rainfall early this week will lead to rising river and stream levels, and could result in lowland flooding through the week.

Those living in areas prone to flooding should be prepared to take action should flooding develop.