DELANO  — Teams have hit the midway point of the regular season, and the powers around the state are starting to rise to the top of the standings.

These two teams meet Friday night at Tiger Stadium in what is Delano’s homecoming game.

Both offenses have been well-balanced over the course of the first four weeks. 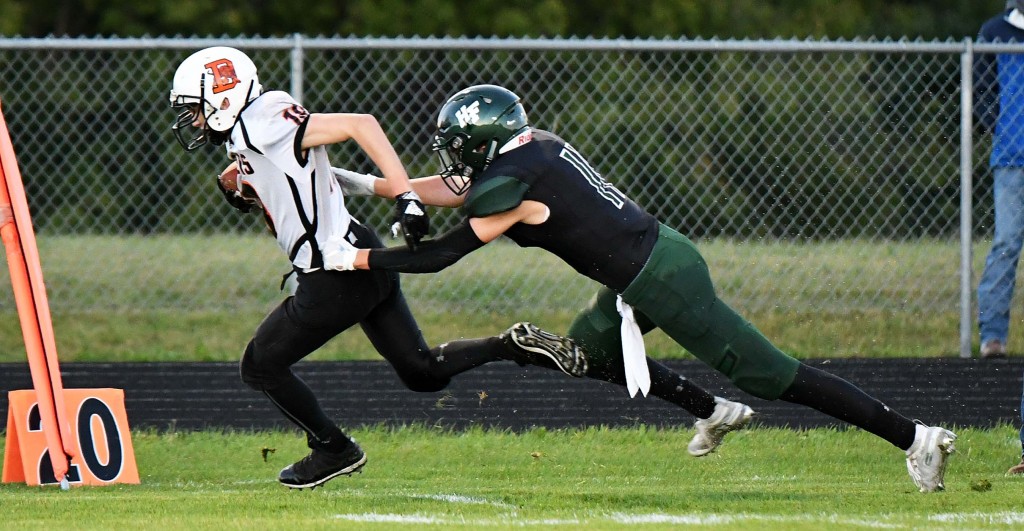 Brett Unrein has been one of Delano’s playmakers so far this season. He and the Tigers will need to make some plays Friday night when they host Dassel-Cokato, which sits on top of the standings.
Photo by Matt Kane

Paul Raisanen is the Chargers’ third-year starting quarterback, and he is a good one under center. Raisanen has completed 62 percent of his passes this season, and has throw for 632 yards and five touchdowns.

Raisanen doesn’t discriminate when it comes to finding a target, as he has thrown the football to six different targets.

Junior Sanders Asplin has 15 catches but has not found the end zone yet.

The leading back for the Chargers is senior Blake Johnson, who is eyeing a 1,000-yard campaign.

Johnson has 563 yards and 13 touchdowns through four games. He averages 8.7 yards per carry.

Raisanen can also run with the football. He has 97 yards and one touchdown on the ground.

“The quarterback is an excellent passer and has been very effective as a runner,” said Delano coach Merrill Pavlovich. “The running back may be the best back Delano will face on our schedule.”

Delano junior quarterback Max Otto has completed 54 percent of his passes, and has thrown for 838 yards and 12 touchdowns.

Like Raisanen, Otto moves the ball around, with six receivers having caught a pass.

Reno Bredahl has emerged as Delano’s playmaker. The senior has 15 catches for 344 yards and five touchdowns. He averages 22.9 yards per catch.

Unrein has 197 yards, and is looking for his first touchdown.

Longstreet has 167 yards and four touchdowns. He is a favorite target of Otto’s in the red zone.

Delano’s leading ground-gainer is senior Sam Kern, who has 314 yards and three touchdowns on 59 carries.

Kern is also involved in the passing game, having caught eight balls for 91 yards and one touchdown.

A statistic that sticks out when it comes to Dassel-Cokato’s defense is 28 tackles for a loss.

Delano, as a team hasn’t gotten to the quarterback much — four sacks for the season — but the Tigers are hawking the ball at the other end of those passes and limiting big plays.

Longstreet has two interceptions, and Caden Link and Adam Brown have one each.

“Delano is a very good team,” said Dassel-Cokato coach Ryan Weinandt. “They are well-balanced on offense, being able to run and throw efficiently.  Defensively they look to be very athletic and physical.

“They have a lot of weapons and playmakers.”

One thing Delano will have to overcome is the injuries to three starters who played both sides of the ball. Lineman Carson vanSytzama, and ends Isaiah McManus and Chris Glunz all exited the Holy Family game with serious injuries.

“With the loss of three experienced starters, our depth is being challenged,” said Pavlovich.

Homecoming week always puts worry into the mind of Pavlovich, as his players are pulled in many directions to participate in the various events that go on during the five days.

“We have addressed the need to remain focused,” said the coach. “Practices thus far have gone well, and we are hopeful that the game versus Holy Family is a subtle reminder of the importance of being prepared.”

Considering the records both teams are carrying into Friday night’s game and precedent from past games, this week’s meeting between the Tigers and Chargers should be a good one.