DELANO, MN – Jo Reinhardt, president and CEO of Delano-based Industrial Louvers Inc., is set to be the recipient of the lifetime achievement award from the Minnesota Chapter of the National Association of Women Business Owners. 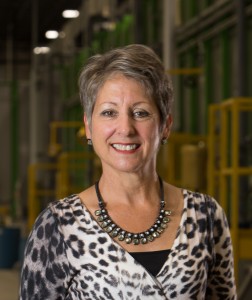 According to NAWBO, “The award goes to a NAWBO member who owns a million-dollar business that has experienced significant long-term growth and success for 20 years or more. The award recognizes an individual who has received numerous awards and recognition for her many achievements growing her business. This individual’s influence and leadership have made a lasting impact. She is considered instrumental to propelling her industry forward and creating opportunities for other women.”

Reinhardt, who also serves as CEO and president of the architectural metal coatings company Verta, is one of a handful of female CEOs in her industries.

She is actively involved in industry associations, including the Air Movement and Control Association, an international nonprofit organization with a global reach. She served eight years on the board of the organization, including as president and chairman in 2006-7. She remains the only woman to have done so in the organization’s 100-year history.

In 2014, Reinhardt received the Gold Eclipse Award from the National Women Business Owners Corporation for outstanding company culture in the manufacturing category. Minnesota Business presented Reinhardt with the bronze award for Manufacturing Executive of the Year in the same year. Her company has been included on the Minneapolis/St. Paul Business Journal’s top 25 Women Owned Business List for four consecutive years.

Reinhardt serves on the Board of Directors for Precision Air Products Company, and is the chief managing partner for three business partnerships.

She and her husband of 43 years, Keith, have two children and six grandchildren and one grand dog. Her interests include playing golf, tennis, running, biking and travel.