MINNEAPOLIS, MN – When Sports Editor Matt Kane suggested requesting credentials for the Final Four, I figured it was a long shot, at best, that we would be granted them.

I was both surprised and elated when I received an email stating that I would, in fact, be going to the conclusion of the “big dance” as a member of the media.

I needed to figure out how I would cover the event.

Knowing that readers can find game coverage in dozens, if not hundreds, of other places, I knew I needed a unique angle.

Duke was the favorite to win the whole tournament, so, of course, they would be in the Final Four and we would be able to cover Apple Valley’s own Tre Jones, right? Wrong.

It seemed like the second-best bet would be Minneapolis native Reid Travis, who was playing for the No. 2 seed Kentucky Wildcats. But, that didn’t come to fruition, either.

There go our local angles.

Finally, an idea came to me. Why not interview other members of the media about their experiences covering Final Fours and other sporting events, their impressions of Minneapolis, etc.?

Luckily, we were able to attend practice a week ago.

Not only was there access to players and coaches, but also fellow members of the media. 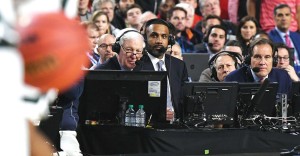 One of those individuals was Grant Hill, who I knew would have a unique perspective as someone who played in three Final Fours, including one in Minneapolis in 1992. This would also be his fifth time calling the game alongside Jim Nantz.

“It’s been a real interesting relationship with the Final Four over the years,” he said.

The first Final Four he called featured his alma mater winning 68-63 over Wisconsin, which he called “pretty special.”

Not only does he enjoy commentating during the Final Four, but he takes it very seriously.

“You get a chance to learn about these teams, coaches, and players, and fall in love with all of it,” Hill said. “You enjoy the stories, enjoy how hard they play, and it’s an awesome responsibility we have to broadcast it. It’s something I really value and appreciate.”

On returning to Minneapolis, he said, “There’s a real sense of pride in this city in hosting a big sporting event.”

I was hoping to interview Nantz, as well, but it quickly became apparent that his schedule would not allow it. However, a CBS representative pointed me in the direction of longtime college basketball insider Jon Rothstein, who has covered the game for 15 years.

I asked about his favorite Final Four moments and teams.

“UConn (University of Connecticut) with Shabazz Napier, in 2014, is one that always stood out,” Rothstein said. “That was always a special one because they were a seven seed and he was so good in that tournament.”

He said he believes each tournament is unique.

“It changes every year,” Rothstein said. “There’s always a different dynamic that makes it really fun to embrace.”

What was that dynamic heading into Saturday?

“There are so many different storylines,” Rothstein said. “Michigan State getting here with limited resources because they didn’t have Josh Langford or Kyle Ahrens. It’s obviously (Chuma) Okeke not being available for Auburn and Texas Tech with, pretty much, a brand new starting five.”

Joseph Goodman, of AL.com, brought a unique perspective with him to Minneapolis. Not only would this be his fourth men’s Final Four, but he has also covered three women’s Final Fours and NBA championships during his time at the Miami Herald.

He said he enjoys covering the college game.

“Just from a logistical standpoint, it’s a lot easier,” Goodman said. “Travel in the NBA wears on you. It’s a fun atmosphere, especially at Auburn basketball games. They have a small arena. It’s extremely loud. Fans are right there in the center of the court. It adds that collegiate feel.”

It’s a little different during the Final Four.

“Hosting them in football stadiums is a money grab, but if they can fill it up, it’d be a great environment,” Goodman said Friday.

They kept the decibel level high throughout the weekend, including when Auburn took the court and lost a close game to Virginia.

Goodman was pleased to see Auburn make it to the Final Four, and not just because he covers them.

“Auburn is such an unlikely team,” Goodman said. “It’s such a breath of fresh air compared to Alabama football, which is this machine.”

While the environment surrounding Alabama and Auburn football is very intense, Goodman said, “These Auburn kids are just enjoying it. It’s such an amazing run. The fans are the same way. The energy of this run has exceeded the energy of every Alabama football season because it’s so unexpected.”

His favorite team to cover, though, was the 2006 and 2007 University of Florida teams led by Joakim Noah.

“That second team, in my opinion, was the best college basketball team in the last 30 years,” Goodman said. “Joakim got all those guys to come back for the second run. They all could’ve gone pro.”

Al Horford, Corey Brewer, Taurean Green, and Marreese Speights all joined Noah in being drafted into the NBA. Lee Humphrey was not drafted but, Goodman noted, he set the record for most 3-pointers in the NCAA men’s basketball tournament, a record that still stands today.

“That team was fire,” Goodman said.

He also took the opportunity to tout the NCAA women’s Final Four.

“The women’s Final Four is an amazing event,” Goodman said. “No one really knows about that, I feel like, but from a reporter’s perspective, it’s so fun to cover because all the kids want to talk and everyone’s really open and wants to have fun and are very engaged.”

Goodman’s insight into both college and professional basketball was very interesting to me.

“There’s a different energy, with the bands, cheerleaders, etc.,” Max said of the tournament.

Regarding Minneapolis hosting the Final Four, he said, “I think we do fine on these things. Everyone has their own signature . . . I love to see the downtown come to life. So many people come in fired up.”

Oh, and, Kevin, if you’re reading this, your brother says, “Hi.”

Minnesota-based journalists Jon Krawczynski, of The Athletic, and Michael Rand, of the Star Tribune, also weighed in before the championship game Monday.

Krawczynski spends most of his time covering the NBA and NFL, but also paid attention to college basketball, in preparation for the Final Four coming to his stomping grounds.

“It’s been fun,” Krawczynski said. “It is something new to me. I’ve done other NCAA tournament games earlier in the rounds but to have the Final Four here has been fun. It’s been well run. It’s been well organized. It’s been easy to get access to coaches and players, which is what you want. I think the atmosphere at the games Saturday was unbelievable, just in terms of the excitement, crowd and all those things.”

He ranked Saturday’s game between Auburn and Virginia right up there with the Minneapolis Miracle in 2018, the NFC title game between the Vikings and the Saints in 2009, and game six of the 2013 NBA Finals when Ray Allen hit a 3-pointer to force a seventh game.

“I don’t think it’s No. 1 or 2, but that was an awesome environment,” Krawczynski said. “It was a great game to watch. Even though it was low-scoring, it was super competitive, really intense, and had big emotional swings. Then, you have the disputed call at the end and, I think, it was a very memorable experience.”

“That was pretty cool,” Rand said. “That was something else. It’s up there. I covered the PGA Championship in 2009, when Tiger (Woods) was trying to win the Grand Slam. I always go back to game 163, when the Twins were playing the Tigers a decade ago. That was pretty dramatic, but this was up there.”

I followed up with them after Monday’s nail-biter.

“Yeah, I would say that one probably moves into the top five after watching the game,” Krawczynski said. “Just a tremendous event, great theater, and huge swings in momentum and emotion. Loved every minute of it.”

“I can’t say I was really surprised,” he continued. “I thought Tech would win, and they almost did. It was tight all the way and Virginia just made a few more plays down the stretch.”

“I’d say that was one of the best games I’ve covered in person,” Rand said. “The drama was high, and both teams executed very well down the stretch.”

Following the game, he wrote a column titled, “Were you expecting a low-scoring, boring Final Four title game? Sorry.”

He referenced some of the sentiment from his column in an email to me.

“I was surprised that it didn’t follow the script, but not shocked,” Rand said. “Sometimes, we overrate averages and how things are supposed to play out and discount how much big moments and small sample sizes can change the narrative.”

All the games throughout the weekend, and the entire experience, exceeded my expectations. The fact that it happened here made me proud to be a self-proclaimed Minnesotan in training.

I am appreciative of everyone who made it possible, and everyone who contributed their insights to this column.