DELANO — In his fourth season as a starting player for the varsity team, senior Sam Kern has been a key in helping the Delano lacrosse program grow into a competitive and well-respected entity in the state.

Wednesday afternoon in the commons area at Delano High School, Kern committed himself to helping another program grow roots in the game of lacrosse.

In front of friends, family, classmates, administrators and coaches, Kern vocalized his intent to play Division II lacrosse on the inaugural men’s team at Lewis University, a private Roman Catholic university located in Romeoville, IL, about an hour southwest of Chicago.

“I believe I will fit in well with the group,” said Kern, who will pursue a degree in mechanical engineering with a minor in physics. “As a team of all freshman, I feel that we will all be really close. There is a great group of Minnesota guys going to Lewis.” 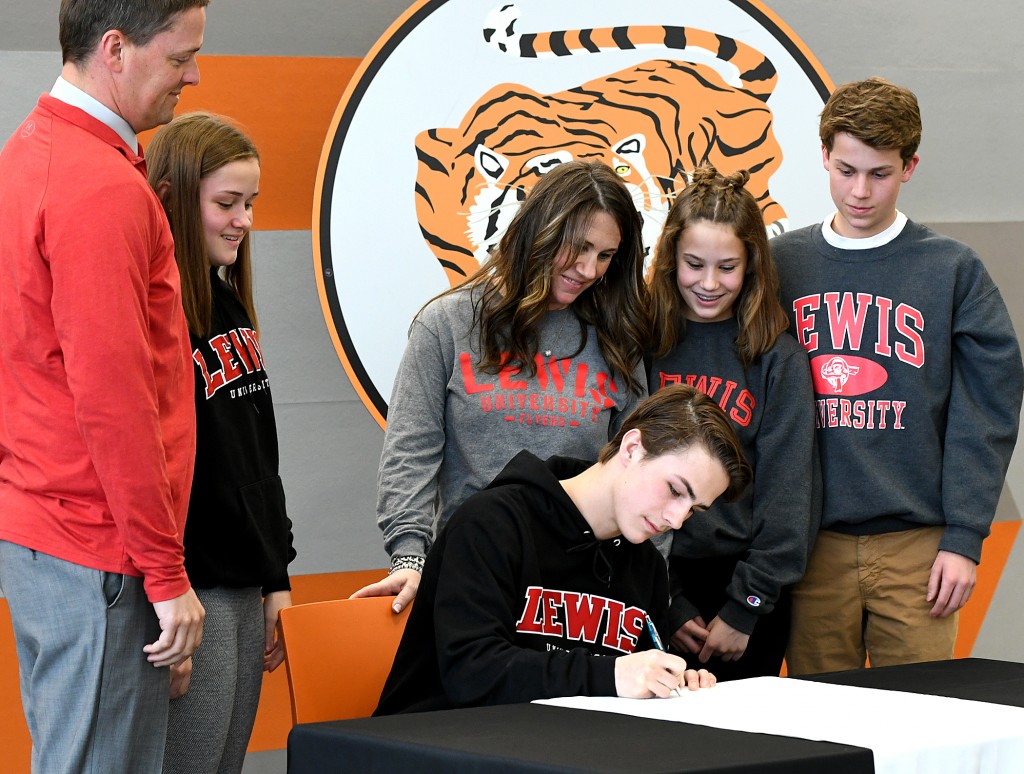 Kern estimates 30-to-35 freshman will make up the first-year team at Lewis.

Kern is a natural leader, and has excelled at Delano in three sports — lacrosse football and basketball. He has state-tournament experience in the latter two, winning the Class 3A championship in basketball in 2018.

“Sam has had a phenomenal career here,” Delano Activities Administrator Ryan Tool told the gathering. “What’s even better is the strong student and good citizen that he’s been. So, we’re very excited for him to start his college career next year and be able to continue as an athlete at Lewis University.”

Kern was a starting running back the last two seasons on the football team, gaining 1,912 yards and scoring 14 touchdowns.

Despite his excellence on the gridiron, Kern always knew lacrosse was the sport he wanted to pursue after high school.

“I loved playing football, but I had no interest in playing at the next level,” he said. “Lacrosse has always been my passion.” 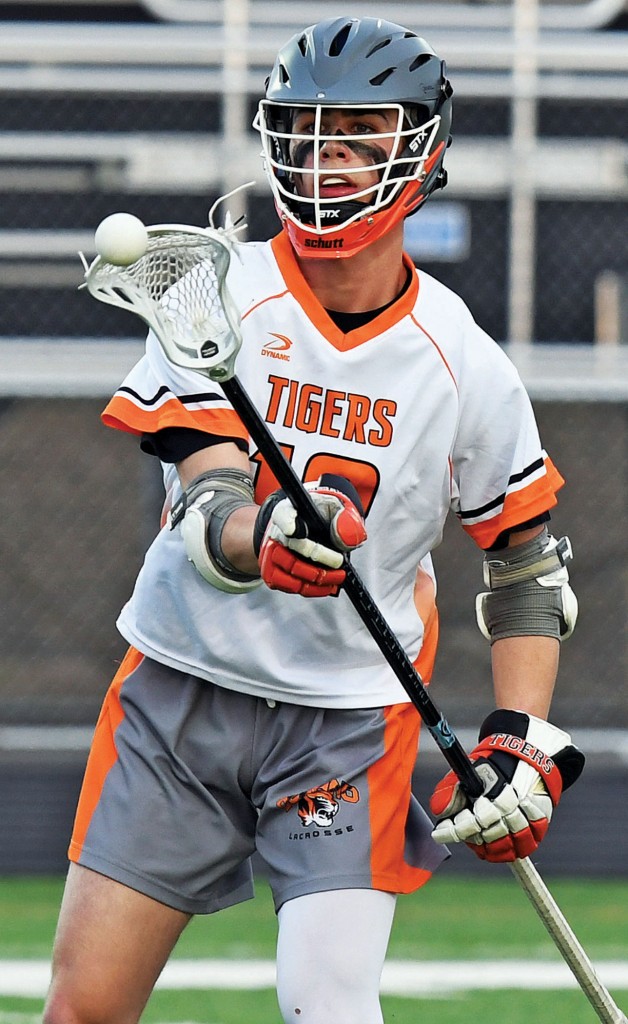 Sam Kern’s two goals helped Delano top Buffalo in the season-opener Monday. After graduation this spring, Kern will head to Romeo, IL, where he will be part of the inaugural lacrosse team at Lewis University.
Photo by Matt Kane

Coming in as a freshman, Kern stepped right into the high-stick midfielder position left vacant by the graduation of Kyle Moonen, who, is currently in his senior season of lacrosse at St. John’s. Moonen is one of the best products Delano lacrosse produced, and, so, too, is Kern.

“His productivity is second to none,” Delano coach Aaron Hagerdorn said of Kern.

Kern scored two goals Monday night in Delano’s 10-5 win over Buffalo in the season-opener. That gave him six goals and 21 points for his career (according to MN Lacrosse Hub).

“I will look back at Delano lacrosse and cherish all the opportunities and chances it has given me.”

Hagerdorn was in attendance Wednesday at the signing, as was Kern’s True Lacrosse Minnesota coach Joe Weichert.

As for the success Delano has had with Kern in the lineup, Kern credits the team-mentality.

“It’s always great look back and see how the team has progressed over the years. The greatest accomplishment as a team has been our team chemistry,” he said. “We seniors have been playing with each other since we were all 10 years old, and that has helped us tremendously.”

Team chemistry often begins with strong leadership, like that of which Kern has provided his teams throughout the years.

“He’s a natural leader. People follow him. He’s a good person, sets good examples, does what he’s asked to do and helps guys along the way,” said Hagerdorn.

Kern will join a Lewis team that will be coached by Joe Perruzzi. The Flyers will play in the Great Lakes Valley Conference with Alabaman-Huntsville, Indianapolis, Maryville, Montevallo, Shorter and Young Harris.