‘Her life was big’ 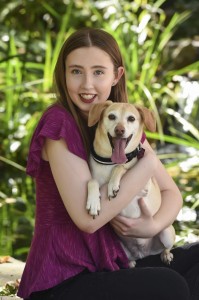 Marleena Dieterich is pictured with her dog, Chica.

DELANO, MN – Those who were close to Delano High School senior Marleena Dieterich want her to be thought of as more than just a crash victim whose life ended March 2.

“I just think it’s important that Marleena gets remembered as more than a high school student who died on Highway 12,” her father, Thom Dieterich, said. “She was bigger than that . . . Marleena’s story is too short, but it’s a good story. I don’t say this just because I’m her parent. Marleena was the best of us. She was just mortal.”

“She was totally alive,” her grandmother, Faye Dieterich, added. “Her mind was extraordinary. She had to be absorbing all that information all the time.”

That desire to do so came at an early age.

“She got very frustrated when she was 2-and-a-half years old because other people would pick up her book and read it to her,” Faye said. “She would pick up her book and she couldn’t read. I was sitting beside her once. ‘Grandma, I don’t understand why they can read and I can’t. She was just so frustrated. By 4 years old, she could read, and she never stopped. There’s a stack of books on the table that she was reading.”

As teachers, she and her mother, Deb Dieterich, would often go to book sales, and Marleena would tag along.

“We’d be there three hours,” Lydia said. “We’d turn around and the cart would be  packed with books and she would come around the aisle with more books in her hands: cookbooks, arts and crafts, things you could do with your hands. She enjoyed drawing and arts and crafts when she had time. She always wanted to do 20 things at once, but didn’t have the time to do it all.”

Stories about books are fitting when remembering Marleena, as she excelled and challenged herself academically.

“She had one of the hardest schedules you rarely see students take,” said Principal Steve Heil, who also served as her advisor. “She took four college classes all day long: Spanish, chemistry, calculus, and psychology. It was amazing . . . She was working two part-time jobs and participating in extracurriculars. I couldn’t have done that. I always saw her as a ball of energy. Her family and friends said she was like the Energizer bunny 24/7.”

She used all that energy to experience a lot of different things.

“She wasn’t afraid to try something new,” Lydia said. “It would have been interesting to see how she tied all her interests and enjoyments together with a career.”

Growing up, her life was filled with variety.

“She enjoyed diversity,” Deb said. “She loved trying to do a lot of things, both physical and academic. She did cheer, she had a black belt in Tae Kwon Do, she loved swimming, and she did dance and gymnastics . . . She loved Destination Imagination. She had gone to globals, as well.”

Deb said Marleena looked beyond herself and her immediate surroundings.

“She was wanting to be out there and try different things and different cultures,” Deb said. “She was not confined to Minnesota or the US.”

Other countries were so interesting to her that she was considering studying at University of East Anglia in Norwich, England.

Heil had no doubt that she would be successful, no matter where she went to college or what she studied.

“I think she was just starting to realize really how intelligent she was,” he said. “ . . . She worked so hard that I think learning seemed easy for her. I think she was just realizing, ‘I can accomplish anything, do anything, as long as I work hard.’ She had a work ethic like you couldn’t imagine.”

One way she used her work ethic was to practice and play a variety of instruments: piano, French horn, and guitar.

“She picked the French horn because it’s the hardest instrument to do anything on,” Thom said. “She decided she wanted to pick up guitar because I had picked it up to self teach myself.”

Thom remembers when Marleena had to choose between band and advanced classes.

“There was no room for band,” he said. “It was a huge decision for her. She really wanted to keep playing. It just wasn’t in the cards.”

She also did not like that she was unable to be a cheerleader her senior year, as there were not enough students interested to fill out an entire team.

“She was very disappointed,” Deb said. “There was nothing she could have done.”

“She was trying to line up resources so there would be a team next year and the girls could experience the camaraderie,” Faye said.

She had the attitude of a cheerleader, whether she was in the uniform or not.

“If you really get down to who she was as a person, she really went out of the way to help people, motivate people, really cheer for people,” Heil said. “One of her good friends was struggling in Spanish. She took time to not just help her in Spanish, but to be more of a tutor, making color-coded note cards, and went the extra mile as a friend to help her friends when they needed help.”

She often went beyond just cheering or helping.

“She was a great defender,” Faye said. “If she saw someone being taken advantage of or being persecuted in some manner, she would quietly but pointedly defend them. If you didn’t need to be defended, you had better be defending someone else and not wallowing in self-pity. She didn’t accept that at all. She thought we all had responsibility and, I think, she thought she could single-handedly stop hate. She was definitely going to try, even if she didn’t succeed.”

Marleena’s friend, Madeline Ess, shared a story to that end.

“At homecoming, people were being mean to one of our friends because he’s gay,” Ess said. “She went out the next day and bought us all rainbow T-shirts. It was really sweet. She wore it for, like, a week . . . She was just really sweet, and nice, and cared about everybody.”

“Everyone’s unique, but she made sure everyone knew they were unique, and she was there for you,” friend Shianne Judge added. “There are no good words to describe her except that she was herself.”

Lydia said Marleena made an impression on people that was not forgotten.

“I have friends who met her only once but said even that one time meant a lot to them and they remembered her smile, and meeting her one time made an impact,” she said. “Everyone is just kind of in shock.”

“Marleena, like most of the kids that I have gotten to know well, was like one of my kids,” Fitzer said. “She was friendly, smiley, pleasant, easy to get along with. My feeling is that everyone knew who she was and that Marleena always had a pleasant hello or smile for them.”

Her caring attitude toward people influenced her decision to become an organ donor.

It led to a desire to study bioscience and, potentially, premed. She also told Heil that she believed that by learning different languages – such as Spanish, French, and Mandarin – she would be able to help others in a different way.

“She had an innate desire to help all living things,” Thom said.

Consistent with that desire, she asked family members to make donations to the World Wildlife Fund in lieu of presents.

“She was dedicated to help the earth, but she hated the outdoors, except she loved to fish,” Thom said. “ . . . She’d tell me fish were hiding somewhere. I’d explain to her why they wouldn’t be there. She cast her line. There was an explosion of water as a bass nailed her bait and she reeled it in. I said, ‘Well, you can ignore everything I say.’”

In addition to fishing in the summer, she also enjoyed swimming and helping with summer school.

“She volunteered here in Delano for many years,” Deb said. “I was in the Minnesota Reading Corps. I worked in the summer, as well. She did it, and kept it going.”

Regardless of the season, she enjoyed socializing with friends, which often included some retail therapy.

“She loved to go shopping,” friend Shianne Judge said. “She would save a lot of money from work and go shopping. She loved to get deals. She was a bargain shopper. She waited until something went on sale.”

“She liked to get the vente pink drink,” Ess said. “She’d always get me a grande double chocolate chip frappe and she’d always buy me cake pops.”

Marleena worked at two different Starbucks and enjoyed experimenting with different recipes she saw online or thought up herself.

“One of the last times we were at Target, she was experimenting with a drink she learned from Instagram,” Lydia said. “She was excited to try it.”

On the day of the crash, she was on her way to buy an espresso machine, Faye said, after saving money to pay for it.

She had done the same thing when she decided she wanted a canine friend.

“She said, ‘I want a dog,’” Thom said. “We had a dog who had attached itself to me. She did her chores, saved her money, went to a rescue, and found Chica.”

Chica accompanied her in the pool, on her own flotation device, and was also a part of Marleena’s senior photos.

Thom remembers a time when she was on the other side of the lens.

When she was 4 and attending Montessori school, she was given an assignment to take a picture of “something that made her say ‘Wow,’” Thom said.

“One of the pictures she took was a pile of decaying leaves and struggling flowers,” he said. “At 4 years old, she looked at it and went, ‘Here is all this death and there is something beautiful coming out of it.’ Most adults would never have seen that. I was flabbergasted and shocked at the depth of a 4-year-old and was wondering what part of me contributed to that. It set the tone for the 18 years I had her.”

Just as Marleena could see life coming out of death, Lydia believed she could always find positives amongst the negatives, and help others do so, as well.

Lydia quoted Dumbledore from the “Harry Potter” series, which was a favorite she shared with her sister.

“‘Happiness can be found in the darkest of times, if one only remembers to turn on the light,’” Lydia quoted, adding, “She’d always look for that light or be the light for people who needed it.”