After impressive high school careers that came to an end at Delano two seasons ago, John Keranen and Andrew Kruse are seeing their dreams come true. The two have committed to hockey and a whole lot more at the Division-1 level

DELANO — High school athletes who are good enough to play at the Division-1 level commit themselves to a college or university, where, often times the playing fields take a front seat ahead of the classrooms. 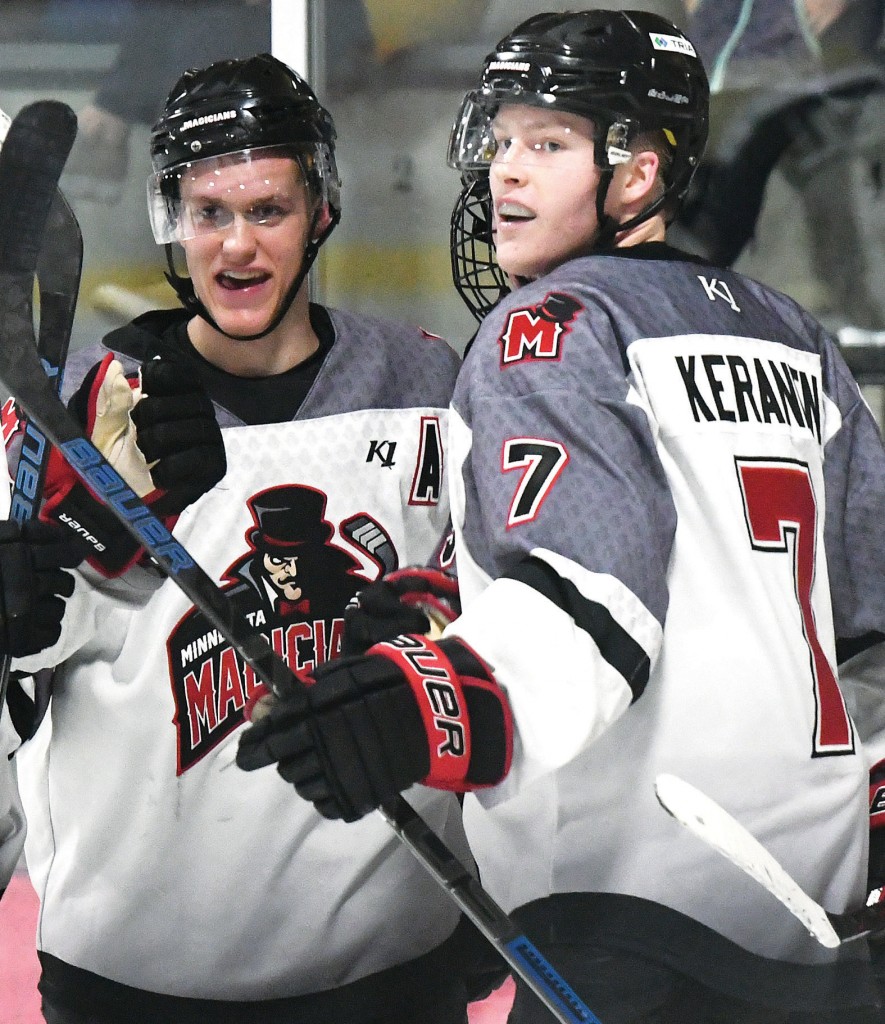 Andrew Kruse and John Keranen are natural leaders, and both have worn a letter as the captain or assistant captain at, both, the high school and junior levels of hockey. Here, the two celebrate a Magicians goal against Janesville March 22.
Photo by Matt Kane

After stellar high school careers on the hockey rink, John Keranen and Andrew Kruse had those Division-1 dreams coming out of Delano High School in 2017. Uncommitted, both went the junior hockey route for two seasons (a typical path in hockey), and, this winter, both, saw those D-1 dreams come true.

While hockey will take up much of their time and focus, unlike typical college-bound players, Keranen and Kruse will not be allowed to push the academic half of being a student-athlete to the background. The United States Army and  the United States Air Force won’t allow it.

In November, Keranen accepted an offer to play D-1 hockey and serve in the Army at West Point. Two months later, in January, Kruse committed himself to hockey and the service at the Air Force Academy.

“My goal was always Division-1, and I achieved that goal,” said Keranen. “I never expected it to be with Army, but I am very happy with my decision, and I am very excited for my future.”

Both, Keranen and Kruse, took a step back to consider the offers before accepting.

“Right away, I was like ‘Ooh, I don’t want to do that.’ As I learned more about it, I learned it was something I could deal with, and something that would benefit me,” said Keranen. “Although it will be a tough process, I decided it would be best for me to go through that, so I could provide for a family in the future rather than being in debt for school.”

“We are similar people, as far as our values and goals. I asked him questions, and I realized a military academy was a good fit for me and was something I wanted to do,” Kruse said, referring to talks with Keranen.

Those talks occured often, during their daily commutes together from Delano to the Richfield Ice Arena for practices with the Minnesota Magicians, a junior-level team in the North American Hockey League (NAHL).

“He was in the same boat as me, thinking this doesn’t sound very great, but we are both similar people in what we want to do in life,” Keranen explained of his talks with Kruse. “Once he heard what I learned form my visit (to West point), he was very attracted to what academies had to offer. I know West Point was full for players, so that wasn’t an option. Once he got that call from Air Force, he was pretty excited.”

Air Force began recruiting Kruse in December. A month later, Kruse was on board and committed to head west to Colorado Springs.

“They, obviously, had to look for players with the right character, as well as player who can play,” said Kruse, who had been in talks with other programs, but had not yet received another offer. “They thought I was someone who could have success there, and they liked the way I played. And my grades fit their standards, so it was a good fit.”

Read much more about Keranen and Kruse’s decisions and about Delano having four former players playing at the Division-1 level next winter in the March 29 print edition of the Delano Herald Journal.