BUFFALO, MN – A warrant has been issued for the arrest of the suspect who allegedly led law enforcement on a high-speed chase from Buffalo to Delano Nov. 15. 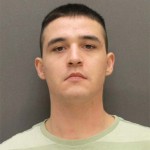 Jerrold Preston Nagel, 27, of Watertown, was charged with felony fleeing a peace officer in a motor vehicle Dec. 12.

According to a formal complaint, Buffalo Police Department officers were dispatched to the Walmart parking lot where a concerned citizen believed a male was injecting himself with controlled substances.

Officers made contact with the occupants of the vehicle, including the driver, who was identified as Nagel. According to officers, a needle was in plain view, Nagel showed signs of drug use, such as constricted pupils and rapid speech, and ultimately admitted to injecting controlled substances.

An officer reportedly ordered the occupants out of the vehicle, but Nagel declined and rapidly left the scene.

Officers pursued the vehicle with lights and sirens activated, with the pursuit proceeding south on Highway 25 through Buffalo. Upon exiting the city, the Nagel allegedly accelerated to about 120 mph.

Numerous law enforcement officers from other jurisdictions joined in, attempting to spike the tires of the vehicle several times.

The pursuit continued south on Highway 25 and east on Highway 12 into Delano, where Nagel allegedly turned into a residential area, abruptly stopped, and fled the scene on foot.

Attempts to locate the defendant utilizing the Minnesota State Patrol helicopter and K-9 were unsuccessful. The passenger in the vehicle was located, detained, and identified the driver as Nagel, who has two pending felony cases in Wright County District Court.

“A warrant is respectfully requested as the defendant’s ongoing controlled substance use and attempt to avoid apprehension pose a threat to public safety and indicate the defendant’s intention to avoid arrest,” according to the formal complaint.

If convicted, Nagel could face up to three years and one day in prison, a $5,000 fine, or both.