ST. LOUIS PARK — It’s a pick ‘em when it comes to a storyline for Delano’s run to the state tournament.

1. Low expectations: Nobody expected this team to qualify; many believing next year’s team to have a better chance because of the success of the players coming up.

2. Inexperienced: None of the players on this year’s state-tournament team played on the 2017 team that won the state consolation championship. But nine current players are a brother, cousin or both to players on that team.

3. A hot goaltender: Aaron Kruse, who was stuck behind all-state caliber goaltender Jackson Hjelle until this year, pitched three shutouts, including a 26-save performance against Orono Thursday night in the Section 2A championship game.

4. Rivalry: Delano and Orono have been rivals for decades, but this was the first time the two had met for the section championship. Plus, Orono was the defending Class A champion.

5. Turning point: Delano was 3-6-1 for the season heading into the Dec. 28 game at Greenway, which is one of the top teams in Class A. The Tigers upset the Raiders 4-3. That win and the chemistry he saw in the team that day gave Delano coach Gerrit vanBergan optimism that the Tigers could make a run. Delano finished the season on a 10-3-1 run, including a seven-game winning streak.

Pick one or blend them all together, it doesn’t really matter. What matters is Delano is headed back to state as the Section 2A champions. 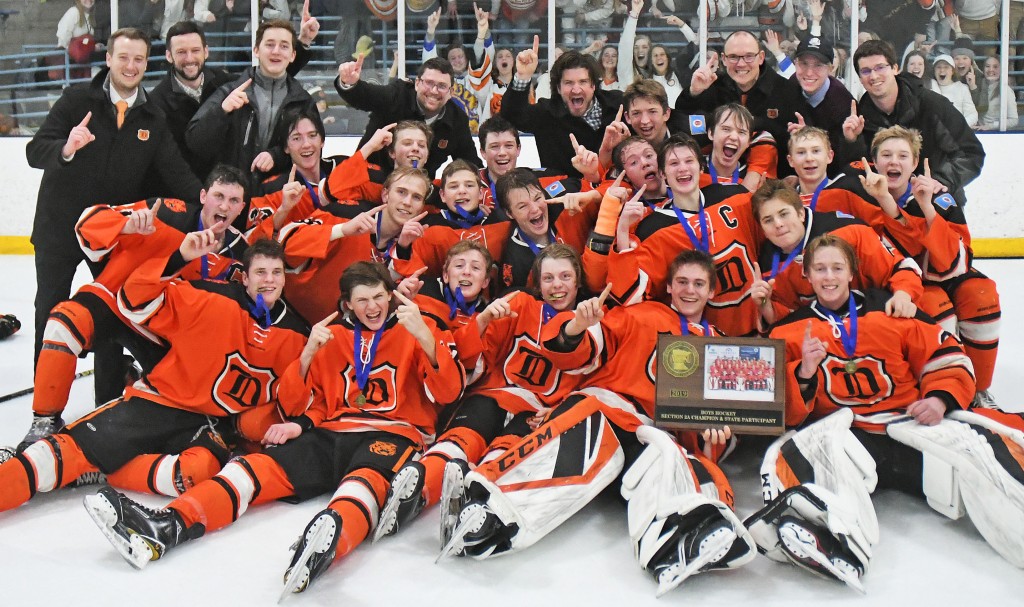 This is the second section championship and state trip for the Tigers. The first was that 2017 trip.

This year’s Tigers punched their ticket to state with three shutout wins in the section playoffs. The third of those shutouts came Thursday night against Orono at the St. Louis Park Rec Center, where senior goaltender Aaron Kruse made 26 saves in Delano’s 2-0 win over the defending Class A champions.

Kruse stoned three prime chances by Orono in the second period, and split his way to an epic right-pad save in the third to keep the Spartans off the scoreboard.

Orono out-played Delano for much of the first period, but a penalty late proved costly for the Spartans, as it resulted in only goal that really mattered.

From a tight angle to the right of the goal, Hogan Williams cleaned up a loose puck at 10:41 to give the Tigers a 1-0 lead.

Delano’s defense, backboned by Kruse between the pipes, held on to the one-goal lead, and was relieved a bit by Adam Brown’s empty-net goal with 20 seconds to play in regulation.

Also punching bids to state as of Thursday night were Minnesota River (Section 1A), New Ulm (3A), North Branch (5A), St. Cloud Cathedral (6A), Greenway (7A) and East Grand Forks (8A).

Mahtomedi and Totino-Grace play Friday night for the Section 4A championship.

Stay tuned for more details and updates for this story.