MINNEAPOLIS — The 2018-19 Delano teamed ended its season the same way the 2016-17 team did, clutching the Class A state consolation championship trophy for a postgame photo at Mariucci Arena.

This current Delano squad claimed the hardware with a 2-1 win over North Branch before the lunch bell rang, as the Tigers and Vikings faced off at 9 a.m. 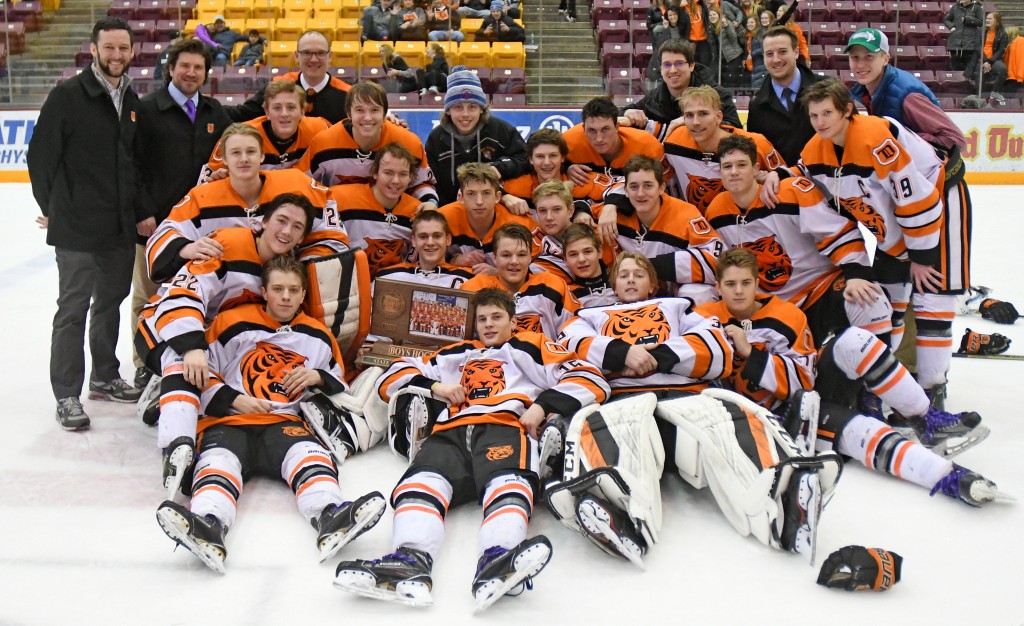 Delano poses with the Class A consolation trophy Saturday morning at Mariucci Arena following a 2-1 win over North Branch.
Photo by Matt Kane

The win was not an easy one for the Tigers, as they had to kill off a five-minute major penalty over the final 4:47 of regulation to secure the one-goal lead. In the final minute of that time, Delano faced a 6-on-4 situation after the Vikings pulled goalie Jake Turek for an extra skater.

Delano failed to clear the puck on several tries, but the Tigers did what they pride themselves on — blocked shots, a handful of them in that final minute. Goalie Aaron Kruse peaked his eyes around screens and through traffic, but did no feel a piece of rubber in the closing minute.

Kruse made 21 saves for the game.

Turek made 17 saves for North Branch.

Delano led 2-0 on goals by Michael Weber and Adam Brown. North Brach made a game of it with two minutes to play in the second period, when Joey Kerchner beat Kruse cleanly.

Brown figured in on both Delano goals, and finished with six points for the tournament. He set up Weber for the game’s first goal at 9:50 of the first period, and used his hustle and tenacity to poke a puck through Turek for a short-handed goal at 9:33 of the second. 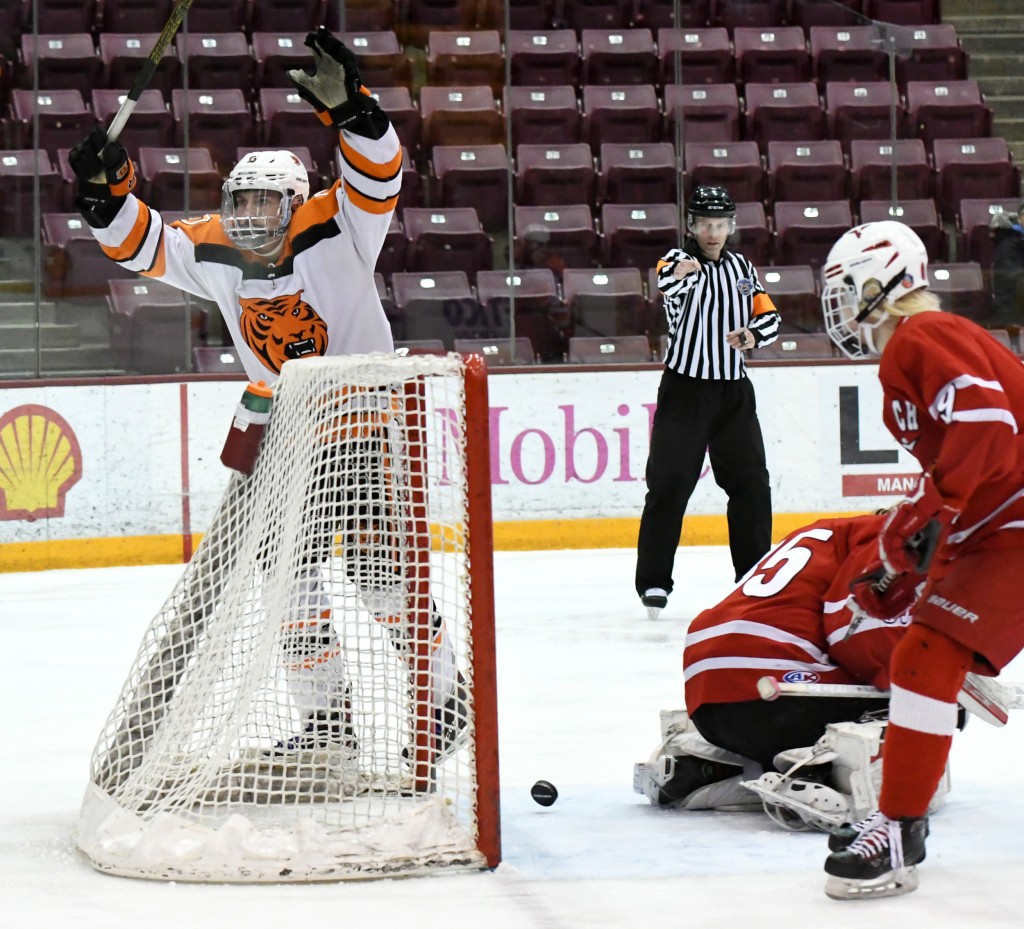 This short-handed goal by sophomore Adam Brown in the second period held up as the game-winner in Delano’s 2-1 win over North Branch Saturday morning at Mariucci Arena.
Photo by Matt Kane

Brown had two assists in the Tigers’ 6-4 opening-round loss to Greenway. He scored the first of his two goals in Delano’s 2-1 win over New Ulm in the consolation semifinal game Thursday.

Quinn Daly had the lone assist on Brown’s goal.

Not long after Delano accepted the consolation trophy at Mariucci, St. Cloud Cathedral raised the Class A championship trophy at the Xcel Energy Center following a 5-2 win over Greenway.

ST. MICHAEL — The winter storm that is expected to wreak havoc on the area forced officials to move the Section 5-3A semifinal games up a day, to Friday, and to relocate them from Halenbeck Hall at St. Cloud State to St. Michael-Albertville High School.

Sophomore Trey Longstreet lays in two points Tuesday in Delano’s 73-26 win over Dassel-Cokato in the Section 5-3A quarterfinals.
Photo by Matt Kane

After a 73-26 win over Dassel-Cokato in the quarterfinals, No. 1 seed Delano will play No. 4 Big Lake in the second semifinal game. The opening tap is schedule for 7:45 p.m.

The early game has No. 2 Willmar against No. 3 Monticello at 6 p.m.

Including the playoff win over Dassel-Cokato, Delano is 6-0 against section opponents this season.

The game for Delano and Big Lake is a rematch from Dec. 20 in Delano. The host Tigers won the early-season affair 57-44 behind 21 points from senior point guard Derek Techam.

Logan Nagorski scored 20 points for the Hornets in the loss.

As for the other teams still alive in the playoffs, Delano defeated Willmar 62-58 Feb. 9.

The Tigers did not play Monticello during the regular season.

Delano and Willmar met in the section title game a season ago. The Tigers topped the Cardinals 75-54, and, of course, went on to win the Class 3A state title.

No comments Posted in Happenings

Posted on March 7, 2019 by Matt Kane
Matt Kane
Sports Editor
Goals from Adam Brown and Hogan Williams were enough for Delano in a 2-1 win over New Ulm in the state consolation semifinal round Thursday at 3M Arena at Mariucci.
In goal, Aaron Kruse made 22 saves for the Tigers.
Delano will play North Branch for the consolation championship Saturday at 9 a.m.
North Branch defeated Minnesota River 5-2 Thursday morning in the consolation semifinals.
No comments Posted in Happenings

ST. PAUL — Delano was unbeaten in its last 10 games (9-0-1) entering Wednesday night’s Class A state quarterfinal game against Greenway/Nashwauk-Keewatin at the Xcel Energy Center. That streak ended at 10, as the Tigers were upended 6-4 by the Raiders. 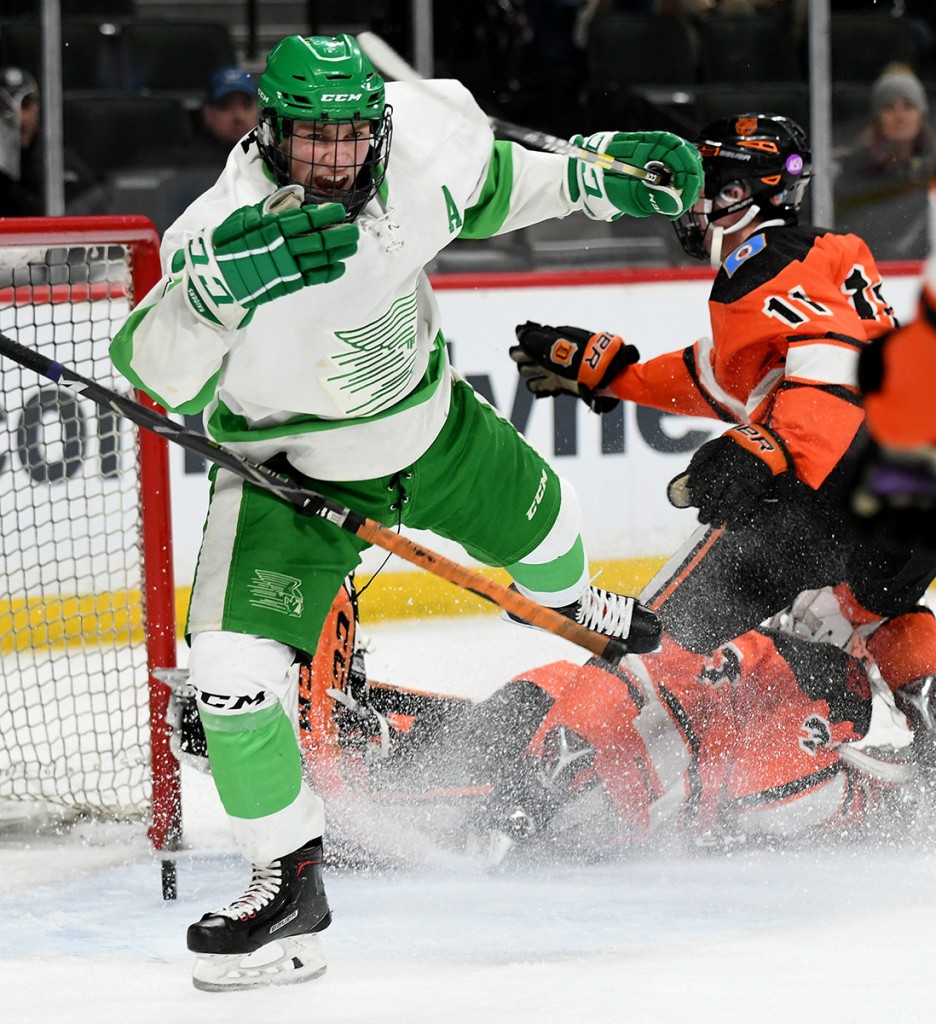 Greenway’s Ben Troumbly begins his celebration after tying the game 2-2 in the second period Wednesday night against Delano in the Class A state quarterfinals at the Xcel Energy Center. In a tight game, Greenway knocked off the Tigers 6-4.
Photo by Matt Kane

The Tigers took a 3-1 lead into the first intermission, but could not hold it, as the Raiders tied the game with two goals in the second. Delano came out jumping in the third, and regained the lead on Kory Dunnigan’s second goal of the game seven minutes in. One minute later, however, Mitchell Vekich tied the game for Greenway, and, from there, the Raiders put the game away with two more in the third period.

Christian Miller scored the go-ahead goal on a slap shot from inside the blue line at 9:40, and Donte Lawson sealed the win for the Raiders with his second goal of the game, an empty-netter with 35 seconds to play in regulation.

Dunnigan’s first goal started the scoring at 7:11 of the first period. Twenty seconds later, defenseman Jack Keranen made it 2-0 in favor of the Tigers with a goal from down low.

Micah Gernander put Greenway on the board at 14:07 of the first period. Delano’s Tommy Peterson scored with 52 seconds remaining in the first period to give the Tigers the 3-1 lead at the first intermission.

The game plan drawn up by Greenway coach Grant Clafton between the first and second periods was a good one, as goals by Lawson (at 1:26) and Ben Troumbly (8:05) went unanswered by the Tigers until the third period.

Senior goaltender Aaron Kruse made 33 saves on 38 shots faced for the Tigers. Kruse served as the team manager during the Tigers’ only other state trip two seasons ago,

The first-period goal by Gernander was the first goal Kruse allowed in four games, since the 3-3 tie with Mound-Westonka in the regular-season finale.

Delano’s student section dressed in purple in honor of senior Marleena Dieterich, who was killed in an automobile accident four days earlier. Delano’s players donned their orange uniforms. A sticker with Dieterich’s initials stuck to the backs of their helmets.

Greenway entered the state tournament off a mountainous high gained from a 3-2 double-overtime win over state-power Hermantown in the Section 7A championship game. Top-ranked Hermantown had won the section title the previous nine seasons.

The meeting at the state tournament was the second encounter between the Tigers and Raiders this season and the third in the past two seasons. During a holiday trip north to the Iron Range, Delano edged Greenway 4-3 Dec. 28. A season ago on that trip north, the Tigers were defeated handily 5-1 by the Raiders.

Wednesday night’s meeting between Delano and Greenway was the final game of the first day of the state tournament. In the first three games, No. 2 St. Cloud Cathedral blanked North Branch 7-0; No. 3 East Grand Forks defeated Minnesota River 5-2; and No. 1 Mahtomedi defeated New Ulm 6-0.

Delano can’t afford to dwell on the loss for long, as they will lace up the skates again Thursday morning in the consolation semifinals. The Tigers will play New Ulm at noon at 3M Arena at Mariucci.

Greenway moves on and will play Mahtomedi in the semifinals Friday afternoon at 1 p.m. St. Cloud Cathedral and East Grand Forks will meet in the first semifinal game Friday at 11 a.m.

The Class AA tournament is Thursday at the Xcel Energy Center.

ST. PAUL — The puck will drop for Delano’s Class A state quarterfinal game against Greenway in just a few minutes (8:30 p.m.). The game can be seen on Channel 45.

Delano is 17-9-2 and is coming off a 2-0 win over rival Orono in the Section 2A championship game.

Greenway entered the state tournament off a mountainous high gained from a 3-2 double-overtime win over state-power Hermantown in the Section 7A championship game. Top-ranked Hermantown had won the section title the previous nine seasons.

The meeting at the state tournament was the second encounter between the Tigers and Raiders this season and the third in the past two seasons. During a holiday trip north to the Iron Range, Delano edged Greenway 4-3 Dec. 28. A season ago on that trip north, the Tigers were defeated handily 5-1 by the Raiders.

Wednesday night’s meeting between Delano and Greenway was the final game of the first day of the state tournament. In the first three games, No. 2 St. Cloud Cathedral blanked North Branch 7-0; No. 3 East Grand Forks defeated Minnesota River 5-2; and No. 1 Mahtomedi defeated New Ulm 6-0.

No comments Posted in Happenings

Delano received the No. 1 seed for the Section 6-3A playoffs. The Tigers host No. 8 Dassel-Cokato Tuesday night at the Tiger Activity Center.

The semifinals and championship games are all at St. Cloud State.